Women have been writing poems for ages – one of the earliest known female poets was the great Sappho, who was born around 630-612 BCE. Since then, women have either openly or secretly written poetry, often using the medium of verse to write about their experiences in worlds that gave them narrowly defined roles. In honor of Women’s History Month, here is a list (a very truncated, incomplete list, mind you) of American women writers that you should read, if you haven’t already.

Phyllis Wheatley: Wheatley’s incredible intellectual ability and her considerable skill with verse make her a must-read. Her poems are both overt and subtle, and her range of subjects include classical forms, social commentary (particularly on slavery and racism), and American life. Her work drew the eye of many notables of the day, including George Washington, for its ability to celebrate America while still facing its very real problems.

Emily Dickinson: Dickinson is one of the best-known American poets. Her poems are renowned for their innovative form and style, and for the insight Dickinson applies to such topics as family, nature, religion, and death. Dickinson was and eccentric and intelligent woman who lived nearly a hermit’s life in her home in Amherst, Massachusetts. Her poems continue to inspire and astound new and old readers.

Maya Angelou: Angelou, who was mourned by a nation when she passed in 2014, is a woman of many talents – writer, activist, singer, dancer, director, editor, and so on. Her poems are powerful and rhythmic, such as the anthem “Still I Rise.” Angelou’s work includes a series of autobiographical (including the famous I Know Why the Caged Bird Sings), as well as screenplays and children’s books. Her poetry is widely read and features subjects such as the African American experience, love and empowerment, and anti-war sentiment.

Anne Sexton: Sexton’s poetry is classified in the Confessional school, with such poets as Robert Lowell and W.D. Snodgrass (whom she admired greatly). There is argument as to just how “confessional” her poems were, but her writing is undeniably intensely personal and tackles controversial subjects such as abortion, menstruation, and challenges to religion and traditional gender roles. Sexton’s craft is as noteworthy as her content, demonstrating an ability with both form and free verse.

As stated, this is by no means a comprehensive or definitive list, but hopefully reading poems by these women will get you fired up for more learning about Women’s History. 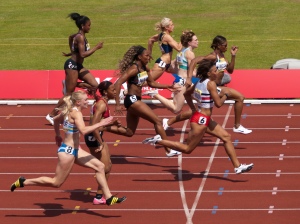 Want more? Run and visit these other poetry-based lists for Women’s History Month: